By 1964, Alan Ladd was an American institution. The definition of icy-cool stoicism packed into a slight 5’7” frame, Ladd personified the archetypal movie tough guy. Not bad for a malnourished kid from Arkansas.

The only child of Ina Raleigh Ladd and Alan Ladd, Sr., Ladd was born in Hot Springs, Arkansas on 3rd September 1913, four years before the death of his father.

The year after Ladd’s father died, the young Alan accidentally burned down his and his mother’s apartment, forcing them to relocate to Oklahoma City. There Ina Ladd met Jim Beavers, a house painter. The two were soon married and moved to North Hollywood, California. There, Ladd was forced to pick fruit, deliver papers, and sweep floors to help make ends meet.

As an undersized and scrawny kid, Ladd had been given the charitable nickname “Tiny.” The nickname would stick with the relatively short Ladd for the rest of his life, even when he became a swimming and diving champion at North Hollywood High School.

For a brief time in 1931, buoyed by his athletic success, Ladd began to train for the 1932 Olympics. Unfortunately, an injury would prevent his participation and force him to give greater consideration to his other teenage passion: acting.

Following graduation in 1934, Ladd bounced through a range of odd jobs, all of which he viewed as means to an end, that end being the launch of his acting career. In addition to working as a gas station attendant, a hot dog vendor, a lifeguard, and a studio carpenter for Universal Pictures, Ladd opened his own hamburger and malt shop, called Tiny’s Patio. His attention during this time was mainly focused, however, on the Universal school for actors. That is until he was dismissed for being too blonde and too short to have any future in movies.

Forced to find an alternative route into show business, Ladd’s first break came in radio, playing small voice parts in a handful of dramas. Strengthening his abilities, he became involved in local theater.

Meanwhile, he continued to work on movie sets as a grip and occasional bit player. Despite setbacks, Ladd found himself regularly appearing in minor film roles by the mid-to-late 1930s. One such role was as a reporter in Orson Welles’ masterpiece ‘Citizen Kane.’

In 1936, things began to change at a rapid pace. Ladd married Marjorie Jane Harrold, a childhood sweetheart, and his mother Ina moved in with them. Shortly afterward though she committed suicide with ant poison. It was also in 1936 that Ladd met Sue Carol, a former screen actress turned agent.

Carol was essential to Ladd landing a major part as an assassin in the 1942 film ‘This Gun for Hire,’ opposite Veronica Lake. After divorcing Marjorie, who, in 1937 had given birth to his son, Ladd and Carol married in 1942.

1943 saw another stall to Ladd’s growing success. That January he was drafted into the US Army to take part in World War Two. He would remain in the service until November when he was discharged with an ulcer and double hernia.

Building off of the runaway success of ‘The Blue Dahlia,’ Ladd found his niche with tough-guy roles. His films consistently featured in the Top Ten box-office lists for 1947, 1953, and 1954.

Though he was known for a certain kind of performance in a certain kind of movie, Ladd’s lasting legacy would come in the form of 1953’s ‘Shane.’ A completely different kind of role for Ladd, ‘Shane’ was acting against type, giving Ladd an unprecedented showcase for both his visual charisma and his subtlety as an actor. On the basis of Ladd’s ability and magnetism, ‘Shane’ was an instant classic. 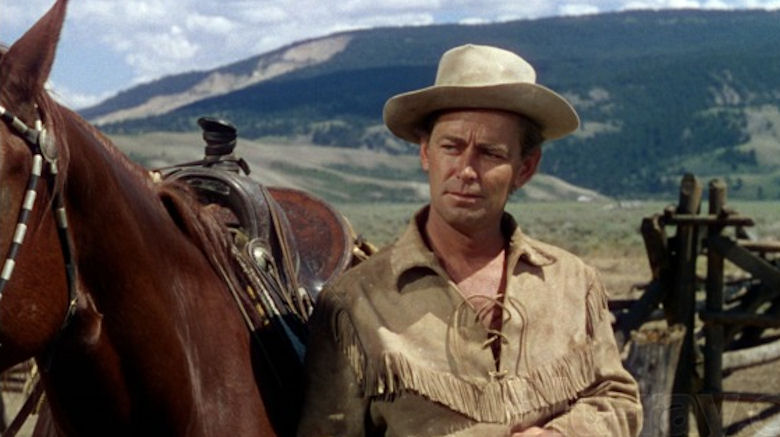 Sadly, Ladd was unable to recapture the acclaim he’d received for ‘Shane’ with future films. Most of his output through the rest of the 1950s was criticized as cliche and, by the early 1960s, Ladd’s star was falling as quickly as it had risen.

In November 1962, Ladd was found face-down in a pool of blood, a bullet wound near his heart. Though an unsuccessful suicide attempt, it revealed that there were problems brewing. Ladd was suffering from depression.

Ladd continued to make movies until his untimely death on January 29th, 1964 at the age of 50. Ladd was found dead of an overdose of alcohol and three other drugs in Palm Springs although his death was ruled accidental.

Ladd’s quiet, assured masculinity set him apart from his less subtle contemporaries. His films, particularly ‘Shane,’ were showcases for soft-spoken, reserved strength that paved the way for a different kind of tough guy.