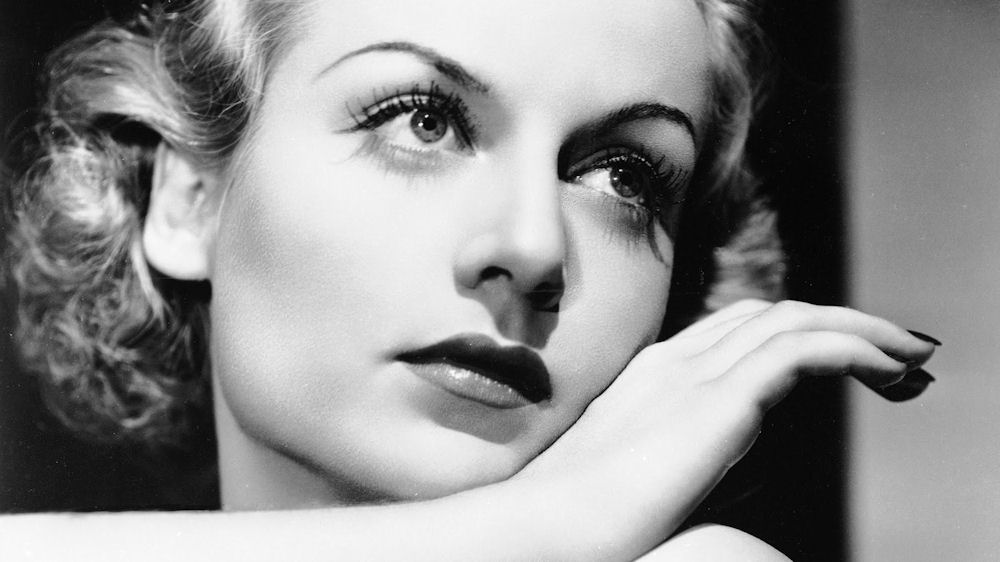 Born Jane Alice Peters, Hollywood starlet Carole Lombard would go on to be called many names, including “The Profane Angel” and “The Hoosier Tornado.” The blonde beauty would eventually become one the highest paid actresses in Hollywood in the 1930s and the darling of America’s favorite leading man, Clark Gable. She would tragically perish in a plane crash at the age of only thirty-three, but left a lasting and wonderful legacy.

Lombard was born into a wealthy family on October 6, 1908, in the city of Fort Wayne, Indiana. She was the youngest of three children. Lombard’s mother was unhappy in her marriage and moved with her children to Los Angeles in 1914. Lombard was an avid sportswoman when she was growing up, and this led to her being discovered by director Allan Dwan, who saw her playing baseball. He gave her a small role in the movie A Perfect Crime in 1921. Dwan describes his first time seeing Lombard, saying that he saw “a cute-looking little tomboy … out there knocking the hell out of the other kids, playing better baseball than they were. And I needed someone of her type for this picture.”

A Perfect Crime was far from a box office smash, but Lombard enjoyed her time filming and decided to actively pursue more roles. She went on auditions and completed a screen test, and at this time changed her first name because she was told: “Jane was too dull.” After several near misses, Lombard was finally given a contract with Fox Film Corporation. She left school, and subsequently changed her surname at the urging of Fox.

Lombard disliked the work she was given during her time with Fox. She was quoted as saying that “All I had to do was simper prettily at the hero and scream with terror when he battled with the villain.” She felt she had more talent than to simply play bit parts as the pretty damsel in distress. Despite a well-received leading role in the movie Marriage in Transit in 1925, Fox decided not to renew Lombard’s contract. Some speculate that it was partly due to a facial scar she acquired as the result of a car crash. As a result, Lombard underwent plastic surgery to diminish the appearance of the scar and would spend the rest of her career carefully hiding the scar with makeup and lighting.

Lombard would truly find her niche when she began working with Mack Sennett, who was known as the “King of Comedy.” She would go on to say that working with Sennett was “the turning point” in her career. She worked in a group of beautiful women known as the “Sennett Bathing Beauties.” They would dress in the popular “bathing costumes” of the time and appear in comedy short films. Lombard was at this time contracted to Pathé Exchange, who produced Sennett’s film.

After several successful roles in popular films such as High Voltage which was Lombard’s first “talkie” movie and Big News, Lombard returned to Fox to film The Arizona Kid. After the success of this film, she was recruited by Paramount Pictures, where her contract was paying her as much as $3,500 per week by 1936.

In 1931, Lombard starred in the movies Man of the World and Ladies Man alongside Paramount’s most popular male star, William Powell. Despite being very different and there being an age gap of sixteen years, the two fell in love and married that same year. The pairing was a huge boost to Lombard’s popularity. The romance was short-lived, however, and the marriage lasted only twenty-six months. Lombard later stated that the reason for the divorce was simply due to the fact that “we were just two completely incompatible people.”

In 1934, Lombard starred in Twentieth Century, which was said to be “a pioneering film in the screwball comedy genre.” The film is often considered to be the one that marked Lombard as a major star. Lombard went on to have massive success in more screwball comedy films, including My Man Godfrey, Nothing Sacred, and Hands Across the Table.

In 1936, Lombard began dating Hollywood icon and handsome leading man Clark Gable. Lombard’s career slowed as she devoted more time to Gable, and they eventually married and bought a ranch in Encino, California. She began working in more dramatic roles, for which she was quite well-received.

In 1941, Lombard traveled to Indiana to help raise money for the war effort. After the event, at which she raised $2 million through defense bonds in one night, Lombard, her mother, and Otto Winkler, who was Clark Gable’s press agent and had accompanied her on the trip, boarded a plane. Tragically on January 16, 1942, after stopping to refuel in Las Vegas, the plane crashed into Potosi Mountain. All on board were instantly killed.

Lombard has been posthumously noted as being among the most commercially successful and admired film personalities in Hollywood in the 1930s, and a natural prankster who was loved by all the technicians and studio functionaries who worked with her. She has been ranked twenty-third on the American Film Institute’s list of the 50 greatest American female screen legends and has a star on the Hollywood Walk of Fame.