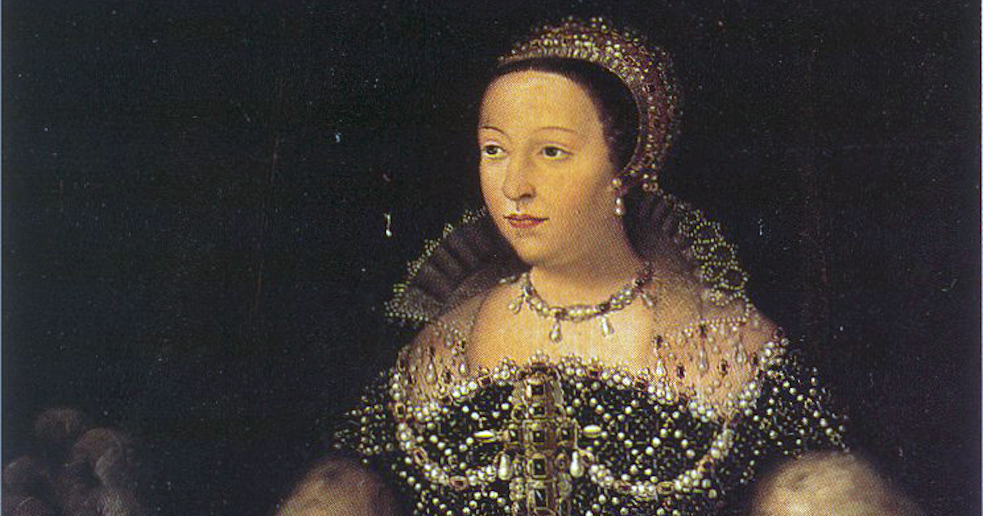 Catherine de Medici was a formidable woman. She was the daughter of nobility, the mother of kings, and the wife of King Henry II of France. The times through which she lived demanded not a subservient queen but a powerful right hand to those in charge and although there is contention about the way in which Catherine handled some of the affairs of state or her involvement in them, one thing is certain and that is that she can almost single-handedly be credited with keeping the institutions of the French kingdom alive during a period of war and strife.

Catherine de Medici was the only child of Lorenzo de Medici who was the Duke of Urbino. She was born in Florence in the spring of 1519, but less than a month after her birth, both of her parents were dead. The title of Duke of Urbino was passed to Francisco Rovere but Catherine was not out of luck nor out of powerful friends as her uncle was Pope Leo X and he took a keen interest in Catherine’s future as a member of the Medici family. When the Pope died in 1521, another member of the Medici family, Cardinal Giulio, was elected to the position in 1523. In 1527, during a period known as the War of the League of Cognac, the Medici family was kicked out of Florence and the young Catherine was taken as a hostage. With the help of the newly crowned Holy Roman Emperor, Charles de Medici, Pope Clement VII managed to retake the city and liberate Catherine following an 11-month siege in 1531.

Pope Clement then set about looking for a viable husband for Catherine to help cement political alliances. When the king of France offered his son, Prince Henry, as a suitor to Catherine, Pope Clement seized the opportunity to form an alliance with one of the most powerful monarchies in Europe. The couple were married in 1533, but Henry was not to be the love of Catherine’s life and he showed little affection towards her, instead choosing to spend his time cavorting with a variety of mistresses and even publicly acknowledging a child he had with one of them. To make things worse, Catherine lost her main support when the Pope died in the same year.

When Pope Paul III would not pay the dowry that had been promised to the king of France and also broke the alliance between the Papal States and the kingdom of France, this hurt Catherine’s prospects greatly. This insult in addition to an inability to catch the eye of the prince or bear his children put Catherine de Medici, politically, in a very weakened state.

Following the death of Prince Henry’s older brother, Catherine found herself under enormous pressure to give her husband a child as any son that she bore Henry would become the heir to the French crown. Catherine is known to have tried a wide variety of tips and tricks in attempts to get pregnant. Eventually, following consultation with a doctor who noticed some potentially abnormal biological issues, and after taking his advice on how to resolve them she soon declared that she was indeed expecting her first child. Catherine presented her husband with a son whom they named Francis, but Catherine didn’t stop there and went on to have nine more children, five boys and four girls. Although Catherine was now successfully producing heirs that would secure the future legal lineage of the kingdom of France, her husband Henry still preferred the company of an older mistress and treated Catherine disgracefully, allowing her none of the normal political powers reserved for a queen consort. It seemed that Catherine was consort in name only, whereas in practice it was Diane de Poitiers, Henry’s mistress who would wield all of the political power of that position.

Diane for her part bore Catherine no ill-will and even encouraged Henry to show her more respect and to spend more time with her. Events came to a head when Henry was mortally injured in a jousting accident. Taking a joust to the face, the splinters impaled him through his brain. His wife Catherine stayed by his bedside until he finally fell unconscious and died 10 days after the accident on 10 July 1559, at which point true power was passed on to her. Catherine was not as vindictive towards Diane as she might have been, and Henry’s mistress retired from public life and lived in her private chateau until her death at the age of 66 on 25 April 1566.

Catherine remained active during the reign of her first-born son, Francis II even though she was not in legal standing as Francis was of age, thus not requiring the presence of the Queen Mother.  Nonetheless, she continued to be an influencer until his death in 1560 upon which her next surviving male child, Charles, ascended to the throne as King Charles IX. This time, because Charles IX was only 9 years old, his mother ruled almost unilaterally with regard to most affairs of state. Catherine would continue to be a strong domineering influence throughout Charles’ reign as well as that of her next surviving son Henry, who became King Henry III following the death of his brother on 30 May 1574.

Throughout the mid-to-late 1500s, religious strife and war reared up throughout many parts of Europe. The Protestant Revolution beginning with Martin Luther had made its way into France and the Protestant group known as the Huguenots were severely persecuted by the Catholic population as well as the Catholic Church itself during a period known as the French Wars of Religion. At the time, France was strongly dominated by the Catholic religion and although at first the Huguenots were allowed to remain without significant persecution, the distrust that grew between the Catholics and the Protestants finally exploded following the death of a prominent Huguenot, Admiral Coligny into a full-on crisis that saw mass rebellion and massacre. Although Catherine herself was a friend of the Admiral, it is she that has been left with much of the blame for the St. Bartholomew Day massacre which occurred during the night of 23 – 24 August 1572. The massacre was the result of concern about a potential Huguenot uprising and an order from the king to kill a group of Huguenot leaders, including Coligny who had been gathered in Paris for the wedding of the king’s sister Margaret to Henry III of Navarre. The killings went on for several weeks and spread beyond the borders of Paris. It is estimated today that anywhere between 10,000 and 70,000 people were killed.

Catherine continued working for her son Henry as a diplomat and an enforcer of the king’s wishes, but as time went on, Henry began to strip his mother of her power. Catherine ultimately became disenchanted with her favourite son as she didn’t have the same level of control over him that she had over the kings that went before. On 5 January 1589, Catherine de Medici died at the age of 69. However, Catherine’s work was not in vain; not only did heirs to the French crown survive, but Catherine’s general policy of compromise and live to fight another day allowed her to work through multiple administrations and through some of the darkest days of the religious wars. Catherine de Medici was an intelligent, shrewd, and cunning queen and one that historians will continue to study for centuries to come.