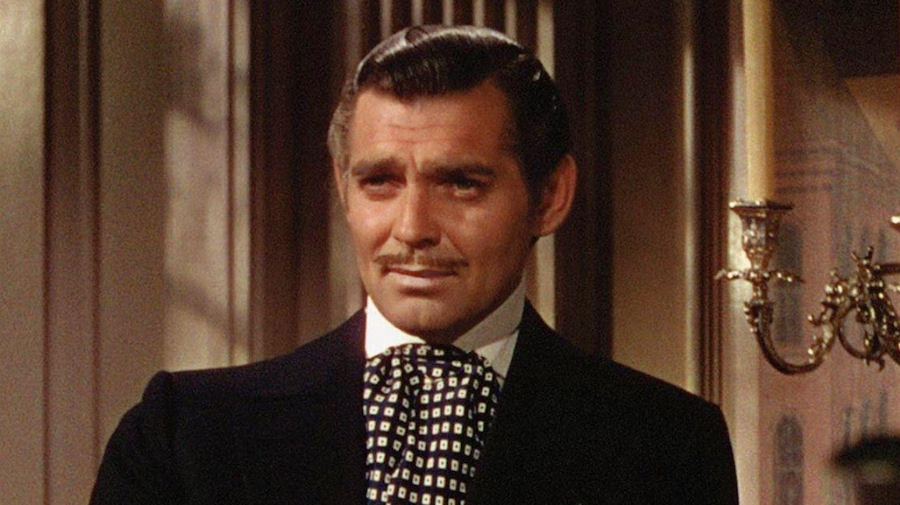 “Hell, if I’d jumped on all the dames I’m supposed to have jumped on, I’d have had no time to go fishing.” – Clark Gable

William Clark Gable was born in Cadiz, Ohio, USA on 1 February 1901. His father, William Henry Gable, worked in the oil industry as a driller. His mother Adeline had William baptised as a Catholic when he was six months old, but only a few short months later, she died, leaving William to be brought up by his father and from 1903, his father’s new wife, Jennie Dunlap, who raised him to be well presented.

Gable had been named William after his father, but even from a very early age, it was the middle name that stuck and he would be forever known as Clark. He learned to play the piano from his step-mother and would later take to playing brass instruments. He took an interest in languages but was also practically minded having been pushed into doing things that were thought of as manly by his father such as fishing and hunting.

As Clark progressed through school, his father started to get into financial difficulties and decided to sell up and move to a place called Ravenna, still in Ohio, near the city of Akron to take up farming. He was hoping to get Clark to work the farm with him but the boy had other ideas and took a job instead at the Firestone Tyre and Rubber Company in Akron.

By the time he was 17 years old Clark Gable had started to become interested in acting after he had seen a play called The Bird of Paradise. When his step-mother died, he inherited some money and so by the time he was 21, he had started to variously take jobs at different companies whilst working his way across the country looking for acting work.

Whilst working as a logger in Portland, Oregon, he met the stage and movie actress Laura Hope Crews who persuaded him to pursue a life on the stage and recommended a theatre company to him. 20 years later, Crews would star alongside Gable when she played the part of Aunt Pittypat in Gone with the Wind.

During his time in Portland, he also met Josephine Dillon who took Gable under her wing. She paid to have his teeth straightened and she fed him enough to bulk him out. She also taught him to have better body posture so he could show a better presence on the stage. As a young man, Gable had a rather high pitched voice and Dillon spent a lot of time with him, training him to lower it. When she was finished with him, Dillon suggested it was time to pursue a career in film.

In 1924 using Josephine Dillon’s money, the pair headed for Hollywood and she became not only his manager but his first wife, even though she was 17 years his senior. He had been using the stage name W. C. Gable but upon their arrival in Hollywood, he changed it to Clark Gable. During 1924, 1925 and 1926, he appeared as an extra in a number of silent movies but wasn’t offered any major roles so took back to the stage.

During 1927 and 1928 Gable landed quite a number of stage parts, and became friends with Lionel Barrymore. The more he acted, the more he gained a following becoming somewhat of a matinee idol. Towards the end of 1928, Clark and Josephine moved to New York with the aim of getting Gable parts on Broadway but the following year would come the great depression and the advent of talking pictures which led to many plays being canceled to acting jobs being particularly hard to find.

Moving back out West, Gable was impressive in a stage production of The Last Mile and was offered a contract by MGM, with his first role in a ‘talkie’ being that of the villain in the Western The Painted Desert. The studio took notice of his performance but his relationship with Josephine broke down and the couple were divorced in 1930. Shortly afterward, he married Maria Langham, also known as Rhea.

Clark Gable’s star started to rise in Hollywood during the early 1930’s as MGM were looking to increase the exposure of their male stars. It also didn’t hurt to have leading ladies such as Joan Crawford asking to work with him, which she did for the 1931 movie, Dance Fools, Dance.  From that point, Gable never played another supporting role, always the lead. Gable and Crawford started an affair which became such common knowledge that the studio threatened to cancel both their contracts if they didn’t cool it, and so Gable turned his attentions to Marion Davies instead. His importance continued to rise during the rest of the 1930’s, especially after the studio paired him with Jean Harlow in Red Dust. They would make six movies together with their last being 1937’s Saratoga, during the production of which Jean Harlow died resulting in doubles to be used for the remaining ten percent of the film.

During the 1930’s Gable made three films with Spencer Tracy, and each one was a smash hit, but in 1939, the movie role came along that would define him. He was Oscar-nominated for the part of Rhett Butler in Gone with the Wind, opposite Vivien Leigh as Scarlett O’Hara. It was a part he didn’t want initially, mainly because it was felt that no-one else could do it. Decades after, Gable said that just as his name would start to fade, Gone with the Wind would be re-released and he would shoot back up the popularity charts again. He would continue to be a leading actor for the rest of his life.

The same year as the release of Gone with the Wind, 1939, Gable married for the third time after a long and drawn out, not to mention expensive divorce from Rhea Langham. His new wife this time was also his leading lady. Clark Gable and Carole Lombard were married on 29 March 1939 and he said that his time with her was the happiest of his life. Their time together would be short though as Carole Lombard was killed when the aircraft she was traveling in, along with her mother and press agent, Otto Winkler crashed into mountains near Las Vegas, Nevada. He was said to be never the same after Carole Lombard’s death even though he married twice more and made a further 27 movies.

In 1942, not long after Lombard’s death, Gable enlisted in the U.S. Army Air Forces. He completed training on 28 October of the same year and was sent to the Flexible Gunnery Field at Tyndall Field, Florida to make a recruitment film in combat with the Eighth Air Force. On 27 January 1943, he joined the 351st Bomb Group as it deployed to England and during this time he was promoted to Captain. He flew five combat missions in B-17’s and was awarded not only and Air Medal but also a Distinguished Flying Cross. He returned to the United States in November of 1943 to complete the film. He would be promoted to the rank of Major before being relieved of active duty on 12 June 1944, at his own request due to his age. His discharge papers were signed by Captain Ronald Reagan. He resigned his commission on 26 September 1947.

After the war, Gable returned to acting and made a number of movies and dated a number of actresses. He married again in 1949 to English actress Sylvia Ashley but they divorced in 1952. As studios now had to compete with television and were also required to reduce costs, Gable was being offered more mediocre roles and the studios said that his salary was excessive. He refused to renew his contract with MGM in 1953 and went independent. His first movies were profitable, if not smash hits. In 1955, Gable married for the fifth time, this time to a fashion model and actress called Kay Spreckels.

Also at this time he started taking on producing duties but found that the schedules associated with being both producer and actor were taking a toll on his health. After outright rejecting TV roles, he made another few movies and ended his colour movie career on a high with It Started In Naples, a light comedy starring Sophia Loren, and which was Oscar-nominated.

On 8 February 1960, Clark Gable received a star on the Hollywood Walk of Fame and in the same year completed 1961’s The Misfits with Marilyn Monroe, a movie many consider to be his finest piece of work.

A heart attack On 6 November 1960, caused Clark Gable to be admitted to the Hollywood Presbyterian Medical Centre in Los Angeles. Over the next few days his condition seemed to be improving but on the evening of 16 November he suffered from an arterial blood clot and died. He was 59 years old.