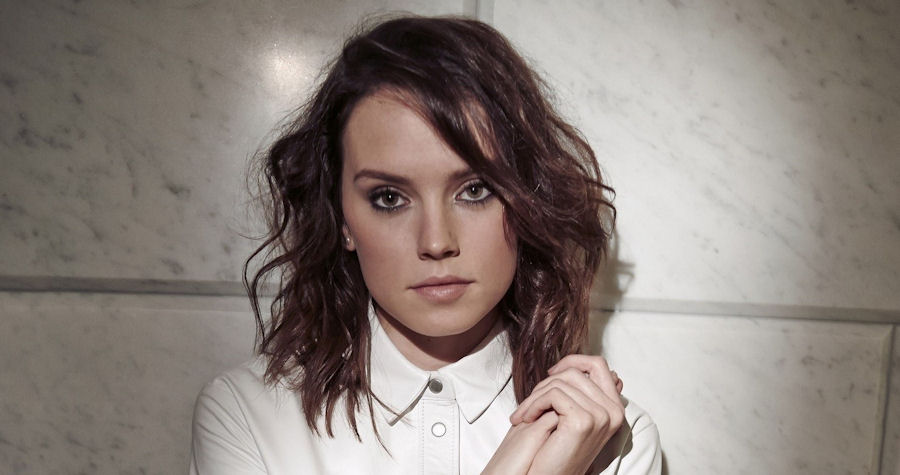 Daisy Jazz Isobel Ridley was born on 10 April 1992 in Westminster, London, England. Her parents are Chris Ridley and Louise Fawkner-Corbett who comes from a landed gentry family. She has two sisters who are both older than her called Kika and Poppy. Her father has been married before and so Daisy also has two half-sisters. Also on the Ridley side of the family is another famous actor called Arnold Ridley. He played the part of Private Godfrey in Dad’s Army. Arnold Ridley was Daisy’s great uncle and as well as being an actor, was also a playwright.

Daisy attended Tring Park School for the Performing arts on a scholarship when she was nine years old. When she left there at the age of eighteen she went to Birkbeck University in London to study classical civilisation but soon dropped out to pursue her acting career.

When she was fifteen years old, Daisy was diagnosed with endometriosis which is a disease that sees tissue which normally grows inside the uterus to grow outside of it, resulting in severe pelvic pain. Daisy underwent several rounds of laparoscopic surgeries to address the problem. The condition also caused severe acne resulting in low confidence and self-esteem, something she addressed through her Instagram account, which she was praised for doing by critics and fans alike. At around the same time, Daisy decided to get a tattoo, which is of three stars. These are located on her left foot. She also has a tattoo of a peace symbol behind her left ear and one of the symbols used in alchemy to represent air on her upper right thigh.

Daisy Ridley’s early career started with minor television roles in shows such as Casualty and Silent Witness as well as a short sci-fi movie called Blue Season which was entered into the Scifi-London 48 Hour film challenge in 2013. Daisy also starred as Jo in film three of Lifesaver in the same year. That short film was nominated for a BAFTA.

Everyone knows though that Daisy Ridley’s breakthrough moment came in 2014 when it was announced that she would be playing the character of Rey, on of the leading roles in Star Wars: The Force Awakens. According to Rolling Stone magazine, she was a total unknown at the time, but this shouldn’t have come as a total surprise as the Star Wars franchise has always introduced new talented actors to the world. The rest, as they say, is history, with The Force Awakens taking over $2 billion in worldwide revenue. It was the highest grossing movie of 2015, which isn’t bad considering it wasn’t released until October of that year. Daisy found her image everywhere she looked, including on a postage stamp which was part of a special Star Wars set issued by the British Royal Mail. The Daily Mail called Daisy, the “real star of the show”.

Daisy has also done some voice work for the Japanese market for the animated film Only Yesterday and will stay with animation into 2018 when she begins work on Peter Rabbit.

Daisy is also developing her talents off-camera as she has also executive produced (and narrated) a documentary called The Eagle Huntress, the true story of a young girl from Mongolia who wants to be eagle hunter, which in her country is something that is dominated by males. It is something that has not been achieved in twelve generations. The movie premiered at the Sundance Film Festival in January 2016.