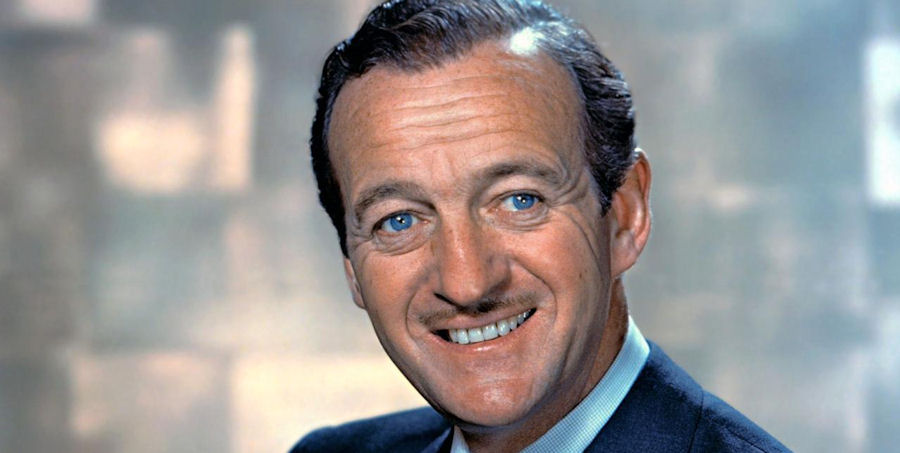 “You can count on Errol Flynn, he’ll always let you down.” – David Niven

James David Graham Niven was born on 1 March 1910 in Belgrave Mansions, London and was given the second name David because he was born on St. David’s Day. His father, William Niven was Scottish and served in the Berkshire Yeomanry during the First World War and was killed on 21 August 1915 during the Gallipoli Campaign.

David Niven’s mother, Henrietta Julia Degacher was of French and British ancestry but was born in Wales. After his father’s death, she married again. Her new husband was Sir Thomas Comyn-Platt. There is some suggestion that Henrietta had been having an affair for some time with Comyn-Platt and that he was actually David’s biological father and photographs of the two show some resemblance.

Niven had three siblings, all of whom were older than he. Margaret Joyce was born in Geneva in 1900. Henry Degacher, known as Max was born in Buckland, Berkshire, England in 1902 and Grizel Rosemary Graham was born in Belgravia, Middlesex, England in 1906. As a child David Niven was known to be a bit of a prankster which led to him constantly getting into trouble at school, culminating with his expulsion from Heatherdown Preparatory School when he was ten years old. It was expected that he would go to Eton but his expulsion put an end to any thoughts of him doing so. He attempted to join the navy but his mathematics wasn’t good enough and so he went to Stowe for a while before attending the Royal Military College at Sandhurst from where he graduated as an army 2nd lieutenant in 1930.

He served with the Highland Light Infantry and was deployed to Malta for two years before spending some time in Dover. He didn’t enjoy his time in the army and after a bit of light insubordination during a boring lecture about machine guns he found himself under arrest. The guard that was supposed to be watching him ended up finishing a bottle of whisky with him instead and allowed him to escape. David Niven headed for America, initially to New York, and resigned his commission by telegraph on 6 September 1933. He found himself in Hollywood the following year.

After a few uncredited parts, he was cast but again uncredited, in Mutiny on the Bounty which starred Charles Laughton as Captain Bligh. He did enough, though, to get noticed by Samuel Goldwyn who got him to sign a contract resulting in Niven appearing in nearly twenty movies over the next four years and playing opposite some Hollywood greats such as Errol Flynn and Laurence Olivier. In 1939 he co-starred with Ginger Rogers in a comedy for RKO pictures called Bachelor Mother.

World War II would put a stop to his Hollywood career for a while as when Britain declared war on Germany David Niven went home and re-enlisted in the British Army. After initially being sent to a training battalion in the rifle brigade as a lieutenant, he transferred to the commandos and to what he hoped would be something a little more exciting. He worked in an army film unit and acted in two films which it was hoped would drum up some support for the British war effort, The First of the Few in 1942 and The Way Ahead in 1944. In June the same year, he took part in the Allied Invasion of Normandy serving in the Phantom Signals Unit which kept commanders informed of enemy positions and changing battle lines.

In 1940 while he was on leave from the army, David Niven met Primula Susan Rollo, known as Primmie. She was the daughter of a lawyer and after a short romance, they were married on 16 September the same year. Two years later the couple had a son called David Jr. and a second son arrived called James Graham on 6 November 1945.

When the war ended, David Niven left the army as a lieutenant-colonel and resumed his movie career in Hollywood, but six weeks after he and his family arrived in the U.S. tragedy struck when on 21 May 1946, Primmie had an accidental fall down a stone staircase. She fractured her skull and was killed. She was 28 years old.

Niven threw himself into his career, but he was now only interested in starring roles, the first of which were in A Matter of Life and Death, The Bishop’s Wife and Enchantment which starred Cary Grant. In 1948 he met Hjördis Paulina Tersmeden, a Swedish fashion model, and the couple were married. For a while, they lived in New York and were neighbours of Audrey Hepburn.

A falling out with Samuel Goldwyn led to David Niven effectively being barred from Hollywood during the 1950’s and so most movies he made during this period were low budget British ones. He did win a Golden Globe though in 1953 for The Moon is Blue and he found himself with a hit on his hands when in 1956 he played the part of Phileas Fogg in Around the World in 80 Days. In 1958 he won an Oscar for best actor for his role in Separate Tables, which would turn out to be his only nomination for an Academy Award.

In 1960 David Niven and Hjördis moved to Château-d’Œx in Switzerland, near Gstaad where Niven became a tax exile, the main reason, it is believed, why David Niven never received a British honour.

With an Academy Award under his belt, David Niven’s star continued to rise starring in such well-known movies as The Guns of Navarone in 1961, The Pink Panther in 1963, Murder by Death in 1976 and Death on the Nile in 1978. During this period he even starred as James Bond, when in 1967 he played a spoof version of everyone’s favourite spy in Casino Royale. In all he made another thirty movies culminating in a cameo appearance in two sequels to the Pink Panther, Trail of the Pink Panther in 1982 and Curse of the Pink Panther in 1983. By this time, though, Niven’s health had started to seriously decline.

He had been showing symptoms of motor neurone disease since 1980 suffering from fatigue and muscle weakness. He was hospitalised for nearly two weeks in February 1983 with digestive problems, but when he left hospital his condition continued to get worse. Refusing more time in hospital he died on 29 July 1983 at the age of 73. He is buried in the cemetery at Château-d’Œx. 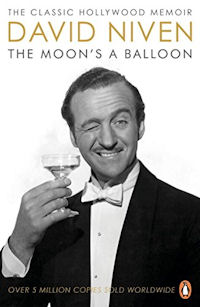 One of the bestselling memoirs of all time, David Niven’s The Moon’s a Balloon is an account of one of the most remarkable lives Hollywood has ever seen.

Beginning with the tragic early loss of his aristocratic father, then regaling us with tales of school, army and wartime hi-jinx, Niven shows how, even as an unknown young man, he knew how to live the good life.

But it is his astonishing stories of life in Hollywood and his accounts of working and partying with the legends of the silver screen – Lawrence Oliver, Vivien Leigh, Cary Grant, Elizabeth Taylor, James Stewart, Lauren Bacall, Marlene Dietrich, Noel Coward and dozens of others, while making some of the most acclaimed films of the last century – which turn David Niven’s memoir into an outright masterpiece.

An intimate, gossipy, heartfelt and above all charming account of life inside Hollywood’s dream factory, The Moon’s a Balloon is a classic to be read and enjoyed time and again. 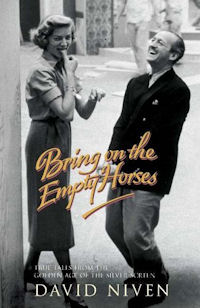 Here is Niven at his best. He and Errol Flynn were filming The Charge of the Light Brigade for a director, Michael Curtiz, ‘whose Hungarian-orientated English was a joy to us all’. High on the rostrum he decided the moment had come to order the arrival on the scene of a hundred riderless chargers. “Okay,” he yelled into a megaphone, “Bring on the empty horses!” ‘

BRING ON THE EMPTY HORSES is the second part of David Niven’s internationally bestselling autobiography, following the superbly entertaining THE MOON’S A BALLOON. Both books were highly acclaimed by the critics and remain as wonderful reminders of a much-loved actor who epitomised, for many, the essential British gent, even when surrounded by the stars of Hollywood.