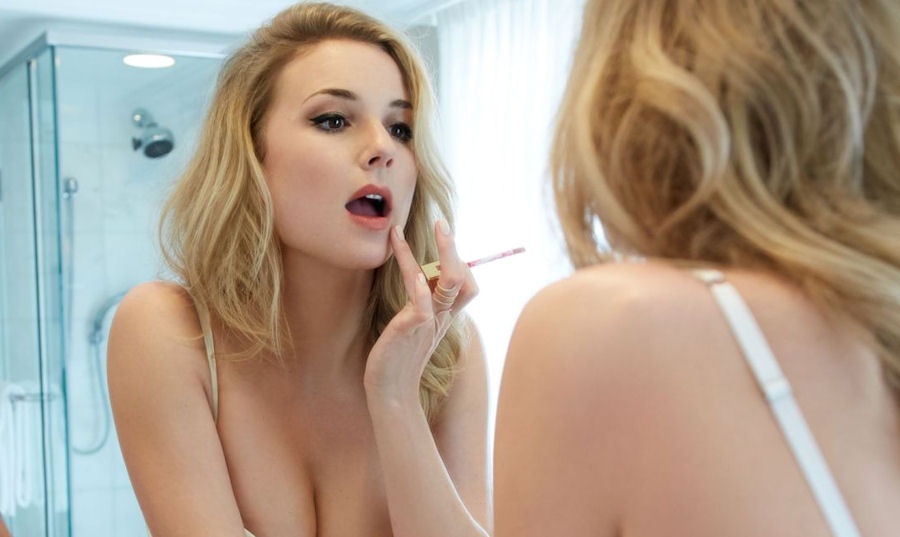 Born in Port Perry, Ontario, on May 12, 1986, to Cindy and Robert VanCamp, Emily Irene VanCamp is a Canadian Actress most recently known for her latest movie role in Marvel’s Captain America: The Winter Soldier, in which she played Agent 13, Also known as Sharon Carter. TV fans will know her as Emily Thorne in the ABC drama Revenge. The third of four girls, her first job was as a delivery girl for her father who is an animal nutritionist, delivering animal food to clients around town.

Her two older sisters are called Katie and Alison. Katie is a former dancer and now writes children’s books. Her younger sister is called Molly.

Early on, in fact at the tender age of 3, Emily started to study dance and always thought that she wanted to be a professional dancer and by the time she was eleven years old she had persuaded her parents to let her attend a training camp in Montreal. By the age of 12, the training had paid off and she was accepted into the École supérieure de ballet du Québec which is where ballerinas for the Canadian Grand Ballet train. She even moved in with a local French Canadian Family to be closer to school. She is fluent in French and says she “feels at home” when she hears the language spoken. She also studied Spanish.

Her interests started to shift though when in 1999, she visited her sister on the set of Ladies Room. Soon afterwards, her Saturdays were devoted to taking acting classes and it didn’t take her long to find an agent. After parts in a couple of commercials, she landed a role in a Canadian children’s horror show called Are You Afraid of the Dark? Her part was very small and had no dialogue, but she did get to play opposite a 17-year-old Elisha Cuthbert.

Following this, VanCamp took on the part of a teenage Jackie Bouvier in an Emmy-nominated TV movie for CBS called Jackie Bouvier Kennedy Onassis. Her first theatrical feature followed the year after in which she played a supporting role as Jessica Paré’s sister in the lesbian-themed drama Lost and Delirious.

Following a couple of other small parts on TV and radio, Emily landed her breakthrough role in 2002 when at the age of 15 she was cast as Sam Dolan, a series regular in the WB’s horror mystery, Glory Days, from the creator of Dawson’s Creek, Kevin Williamson. However, the show only received mild reviews and was cancelled after only 9 episodes. One of the writers on the show though, Greg Berlanti, was impressed by VanCamp’s performance which he said reminded him of Katie Holmes and he desperately wanted to work with her again, so he cast her in his new show, also on the WB called Everwood. Emily VanCamp played Amy, the daughter of Dr Abbott, who gets into a relationship with Ephram, the son of Dr Brown. The show focused quite heavily on the relationship between the two families and Amy and Ephram were never far from the central story. Emily received four Teen Choice nominations for the role as well as a Young Artists Award nomination.

During breaks from filming Everwood, VanCamp had started to dip her toe into the waters of the film industry and played parts in thrillers such as No Good Deed, A Different Loyalty and Rings, a horror short which fills in some of the gaps between the events in The Ring and those in The Ring 2 and lead directly into Emily VanCamp’s appearance at the beginning of that film.
In 2006 VanCamp filmed another horror movie part in Carriers and also had an appearance in an episode of season 8 of Law & Order: Special Victims Unit.

When she was 20 years old she was cast in a role by Greg Berlanti again as a regular in the first season of Brothers and Sisters for ABC. VanCamp played the part of the daughter of the family patriarch, the result of a long-standing affair, who appears following her father’s death. She continued to play the role for four seasons and also reprised it for a couple of guest appearances during the show’s fifth and final seasons.

Her only award so far came when she was on a break from filming Brothers and Sisters in 2008 when she starred in the dramedy Norman, which won awards at the San Diego Film Festival and the Breckenridge Festival of Film. At around the same time she also starred in the two-part TV movie, Ben Hur

Although her breakthrough came in 2002, it wasn’t until 2011 that Emily VanCamp landed the part that would give her the recognition she deserved, when she was cast Amanda Clarke / Emily Thorne in the ABC drama Revenge which went to a full series order in that year. VanCamp has earned a couple of Teen Choice Awards nominations for her role.

Her first role in a major Hollywood movie came shortly afterwards when she was cast as Sharon Carter, also known as Agent 13, in Marvel’s Captain America: The Winter Soldier. As well as being a competent agent, VanCamp’s character is also a possible love interest for Chris Evans’ Captain America, which is slightly weirdish as she is the niece of Peggy Carter, the titular character’s previous love interest. It has also been announced that Emily VanCamp will reprise the role of Sharon Carter in the next movie in the series, Captain America: Civil War.

It seems that Emily VanCamp’s career has started to accelerate since her appearance in Revenge as she has since completed work on 2015’s The Girl in the Book and has now started filming Captain America: Civil War.

As far as her personal life is concerned she seems to have a habit of dating her co-stars as she has dated Chris Pratt whom she starred alongside in Everwood and Dave Annable (Brothers and Sisters) and Joseph Morgan (The Originals). She is currently dating her co-star from Revenge, Josh Bowman and they have been together since 2011.