“When I am dead and opened, you shall find Calais lying in my heart.” – Mary I of England

Mary Tudor, daughter of King Henry VIII became Mary I of England and Ireland in the 1500s. She was known for the violent execution of Protestants, which earned her the unfortunate nickname ‘Bloody Mary’ after her death.

Mary was born on 18 February 1516 at the Palace of Placentia, which is in Greenwich, downstream from London on the banks of the River Thames. She was the only child of King Henry VIII and his queen, Catherine of Aragon to survive infancy. As a child, Mary was described as precocious.  At just four and a half years of age, she gave a performance on a type of harpsichord for a visiting French delegation.

She was largely educated by her mother who commissioned the Spanish humanist Juan Luis Vives to write a book about the education of girls. When Mary was nine years old, she was already reading and writing in Latin. Additionally, she studied music, dance, Spanish, French and possibly even Greek.

In terms of physical appearance, Mary looked like her parents and had an extremely fair complexion with light blue eyes, and strawberry blonde verging on red hair. Although her father was very affectionate towards Mary, he lived with the disappointment of not having a son which thus came with the added difficulty of finding a suitable marriage match for her. In 1522 when she was six years old it was arranged for her to marry her twenty-two-year-old cousin, the Holy Roman Emperor Charles V, a marriage that would never officially be consummated.

As a teenage girl, Mary was frequently ill with irregular menstruation and she suffered from depression. She was not allowed to even see her mother, who lived a distance away from her due to King Henry’s wish for a divorce due to the queen not having produced him a son and heir. When Catherine was ill, Mary was still not allowed to visit and when she died in January 1536 at the age of 50, Mary was inconsolable and grieved for her mother in semi-seclusion in Hertfordshire.

In 1533, Mary’s father married Anne Boleyn who was already pregnant with his child, and the Archbishop of Canterbury officially determined that his previous marriage was void and his current marriage to Anne was, therefore, valid. Anne’s child was a girl called Elizabeth and Mary was left to look after her. As her father’s marriage to Catherine had been deemed void, Mary was stripped of her ‘princess’ title and was given the title ‘The Lady Mary’. It wasn’t just the title she lost either, as Elizabeth now became heir to the throne in Mary’s place.

Mary was sent to live in the household of Elizabeth at Hatfield, Hertfordshire. Her father’s marriage and her removal of rights of inheritance along with Elizabeth now being called princess upset Mary and she would not acknowledge their respective positions, greatly angering the King. Mary continued to be frequently ill and depressed and her relationship with her father worsened; for three years they didn’t even speak to each other.

By 1536, Queen Anne had fallen out of favour with the King. He had her brought up on charges of adultery, incest and treason, and on Friday 19 May 1536, Elizabeth’s mother was beheaded at the Tower of London. This turn of events led to Elizabeth also being removed from the line of succession. The King pressured Mary to sign a contract that recognised him as the head of the Church of England.  This document also meant she would accept her own illegitimacy on the basis that the marriage between her parents was unlawful.

Henry married six different wives in all, divorcing two, and executing two, with one, Jane Seymour, the mother of Henry’s only son dying due to complications during childbirth. His last wife, Catherine Parr survived him. Henry and Jane’s son would become Edward VI following the death of his father, and in 1543 he returned both Mary and Elizabeth to the line of succession.

However, Edward was a Protestant like his father, but Mary was a staunch Catholic and this led to many disagreements between the pair. When he died, at the age of only 15 in 1553, Edward through his will, had his two sisters once again removed from the line of succession and named his first cousin once removed Lady Jane Grey as queen. But despite this, and with the help of many supporters, Mary did, in fact, become Queen of England and Ireland in July of the same year, but not until she had managed to overthrow Jane, who she had brought up on charges of treason, executing her on 12 February 1554.

Following this, the new queen’s first priority was to be married and to have a child so as to ensure that her Protestant half-sister, Elizabeth would not ascend to the throne. So on 25 July 1554, she married Phillip II of Spain at Winchester Cathedral just two days after meeting him for the first time.

Mary was a religious extremist and during her reign, under the Heresy Act, she executed over 800 Protestants, beheading and burning alive many to the disgust of even those who supported her religious efforts. Her reign is not remembered as a prosperous one, there was consistent rain and flooding in the kingdom which led to famine and although her husband Philip was Spanish, powerful and wealthy, in terms of trade, England did not benefit. There were a few times when Mary thought she was pregnant, but ultimately she never produced an heir, perhaps due to her sicknesses when she was younger but it also didn’t help that her husband spent most of his time in Spain, only occasionally coming to England to visit her.

In May of 1558, after one of Philip’s visits, Mary again thought she was pregnant but again it was found that she wasn’t. She became ill and suffered from abdominal pain, possibly due to uterine cancer or ovarian cysts. She died at the age forty-two on 17 November 1558. Having no children, the throne went to Elizabeth, and Mary’s efforts to keep England Catholic were soon to be undone. Mary left a legacy as being the first woman to successfully claim the throne of England despite opposition, and it was under her that England’s expansion of the navy and colonial expansion had begun, even though the benefits were more felt by her sister and successor, Elizabeth. However, her reign is remembered as unpopular, ineffective and violent and it is hard to see the label of Bloody Mary, being forgotten anytime soon. 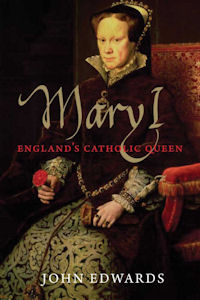 Synopsis: The lifestory of Mary I, daughter of Henry VIII and his Spanish wife, Catherine of Aragon-is often distilled to a few dramatic episodes: her victory over the attempted coup by Lady Jane Grey, the imprisonment of her half-sister Elizabeth, the bloody burning of Protestants, her short marriage to Philip of Spain. This original and deeply researched biography paints a far more detailed portrait of Mary and offers a fresh understanding of her religious faith and policies as well as her historical significance in England and beyond. John Edwards, a leading scholar of English and Spanish history, is the first to make full use of Continental archives in this context, especially Spanish ones, to demonstrate how Mary’s culture, Catholic faith, and politics were thoroughly Spanish. Edwards begins with Mary’s origins, follows her as she battles her increasingly erratic father, and focuses particular attention on her notorious religious policies, some of which went horribly wrong from her point of view. The book concludes with a consideration of Mary’s five-year reign and the frustrations that plagued her final years.Childless, ill, deserted by her husband, Mary died in the full knowledge that her Protestant half-sister Elizabeth would undo her religious work and, without acknowledging her sister, would reap the benefits of Mary’s achievements in government. 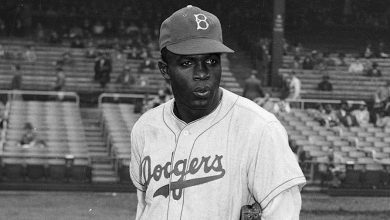