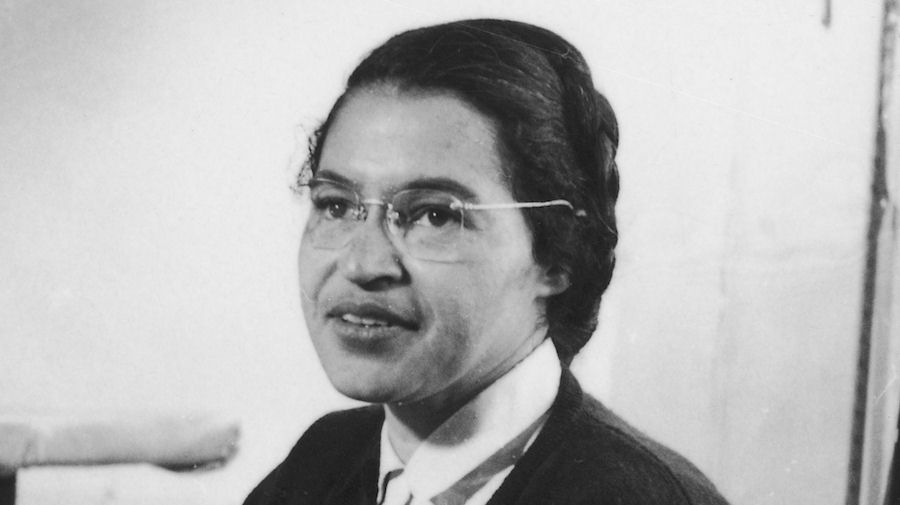 Although the Civil War had officially ended over 60 years before she was born, Rosa Parks was an American civil rights activist, at a very tense time in US history when equality had not been fully achieved. She was born Rosa Louise McCauley in Tuskegee, Alabama on 4 February 1913 and has been referred to as the first lady of civil rights as well as the mother of the freedom movement.

Rosa was African-American, with Scots-Irish and Native American great-grandparents. Her parents separated when she was young, so she and her little brother Sylvester were raised by her mother’s parents. Until she was eleven, Rosa went to rural schools in Alabama, later taking courses as a student of the Industrial School for Girls. After that, she went to a school operated by the Alabama State Teachers College for Negroes, which was a secondary education school. Unfortunately, due to the poor health of her mother and grandmother, she couldn’t continue her education as it fell to her to take care of them.

In Alabama at the turn of the 20th century, the former Confederate states – including Alabama – had implemented the “Jim Crow Laws” which forced racial segregation, and left little opportunities for success for African-Americans. White and black people, even as children, were not allowed to ride the bus together, and the African-American students had to walk to school.

Growing up, Rosa was disturbed by the inequality in her society and was often bullied by white children in her neighbourhood although she would not accept it without a fight.

In 1932, Rosa was married to Raymond Parks. He was a barber and a member of the National Association for the Advancement of Coloured People, or NAACP. Rosa had several different jobs including domestic worker and hospital aid. Her husband encouraged her to finish high school, and in 1933 she graduated, making her one of less than 7% of African-Americans who had a high school diploma at the time. Although the Jim Crow Laws discriminated against African-American voters, she tried to register three times, and on the third time succeeded.

In 1943 Rosa Parks became very active in the civil rights movement and joined the NAACP as secretary. Referring to this time, she said that she was the only woman there and they needed a secretary and she didn’t want to say no. Rosa not only had to toil for her rights as an African-American but also as a woman at a time when it was viewed that a woman’s place was in the kitchen.

For a while, she worked as a housekeeper and seamstress at Maxwell Air Force Base in Montgomery, Alabama, for Clifford and Virginia Durr, a white couple. Since the Durrs were very liberal politically, they became friends with Rosa and helped to sponsor her to attend the Highlander Folk School which was an educational facility for activism workers who sought racial equality.

Montgomery had implemented a city law in 1900 that allowed for the segregation of bus passengers by race. Although the actual law maintained that no one would have to move or give up their seat if there were other seats available, over time, law started to give way to custom. Because of this, the bus drivers started to make black passengers move when no white only seats were available. The buses had sections where ‘coloured’ people sat in the back, and white people sat in the front of the bus, even though most of those who rode were black. Many African-Americans were disturbed by this inequality and had complained for decades.

One day in 1943, Rosa paid the fare and started to board the bus, but as she did so the driver, James Blake, told her to follow the rules and board the bus from the back door. Instead of complying, Rosa left the vehicle and waited for another one to come along, determined not to ride with Blake again. This resulted in her walking in the rain.

On 1 December 1955, she paid her bus fare after a long day at work and sat in the first of the back rows that were reserved for blacks in the coloured section. At first, she didn’t see that the driver was James Blake who had made her walk in the rain 12 years earlier. As the ride progressed, whites-only seats filled up. The driver noticed that there were a few white passengers who were standing since the front had been completely filled. Blake decided to move the coloured section and make the black passengers give up their seats to the white passengers. Three out of four who had to stand complied, but the one who did not, was Rosa. The driver insisted, “Why don’t you just stand up?” to which she responded, “I don’t think I should have to stand up.” Although Rosa was very reasonable and calm, Blake called the police to have her arrested.

Rosa was taken to jail, but was bailed out by some of the members of the Montgomery Chapter of the NAACP. An Alabama State College Professor, Joanne Robinson, conferred with the NAACP president regarding Rosa’s treatment. They stayed up all that night copying over 35,000 handbills about a bus boycott. On 4 December, 1955, plans for the Montgomery Bus Boycott had been announced. African American church members all agreed to participate in the boycott with the aim of achieving fair treatment, forcing companies to hire black drivers, and a first-come basis for bus seating. Even the next day through the rain, the African-American community continued their boycott.

There was a meeting to discuss strategies to continue the boycott effort and the Montgomery Improvement Association name was adopted. They elected Martin Luther King, Jr. as their president, who at the time was relatively new to Montgomery, young, and a church minister. In 1956, nearly a year later, the Montgomery bus system was officially integrated.

Rosa continued to be a civil rights activist as long as she was able to, even as old age approached. Rosa Parks died on 24 October 2005 at the age of 92.

She has been awarded and honoured both during her lifetime and posthumously, and continues to inspire many, leaving a legacy of hoped for peaceful equality.