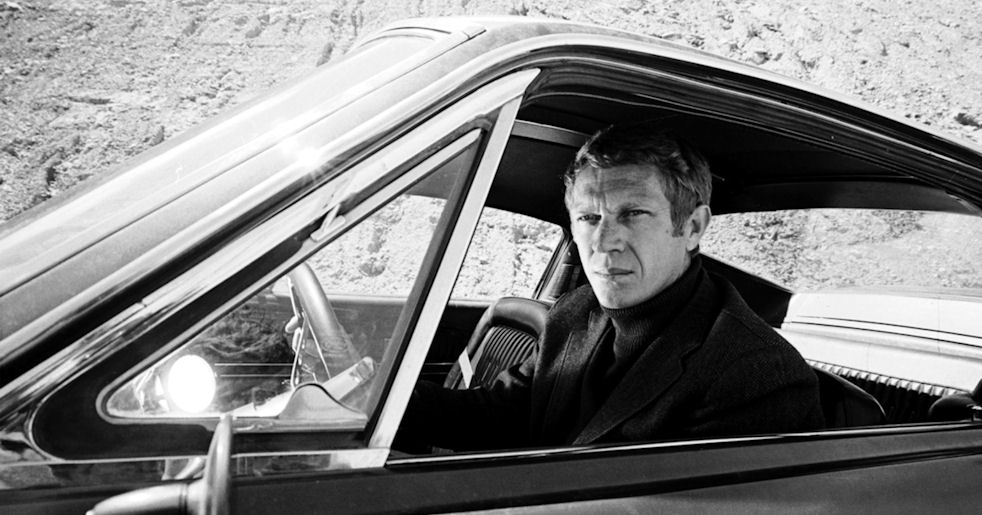 “I’m not sure that acting is something for a grown man to be doing.” – Steve McQueen.

The King of Cool as he became known, was born Terence Steven McQueen on 24 March 1930, in a suburb of Indianapolis called Beech Grove. He grew up on his uncle Claude’s farm during the great depression with his grandparents. They had been left to look after Steve because his alcoholic mother, Julia Ann couldn’t cope alone following the departure of her new young son’s stunt pilot father William Terence McQueen only six months after they had met. McQueen’s interest in racing is said to have been triggered by the gift of a red tricycle given to him by his uncle when he was four years old. Four years later, Julia Ann found herself a new husband and moved to Indianapolis, taking eight-year-old Steve with her.

The young McQueen’s new life was a marked contrast to his old one. Uncle Claude had been good to him, but his stepfather would regularly beat him. At the young age of only nine, he left home to live on the streets and started to turn towards a life of crime. Thankfully his mother stepped in and sent him back to her brother’s farm in Slater.

Julia Ann’s second marriage ended in divorce, but she married for the third time and moved to Los Angeles and sent for Steve to join her when he was twelve. His new home was much like the last one he’d had with his mother and he and his mother received regular beatings. Steve rebelled again and once again was sent back to the farm. He didn’t stay too long this time though and left when he was fourteen to join the circus. This too wouldn’t last that long, and he ended up back with his mother in Los Angeles and started again to drift towards crime. After being caught stealing hubcaps and getting into a fight with his stepfather, he was remanded to the California Junior Boys Republic in Chino. In this institution Steve McQueen would start to mature as the boys would find a way to set their own rules and if they weren’t followed then punishment would follow, but this made Steve respect the rules to a certain extent and although he wasn’t popular at first, he ended up being elected to the Boys Council, where he helped to set the rules. He left the Boys Republic at the age of sixteen but had a life-long association with the place, regularly visiting and talking to the boys, even during the height of his fame. It also turned out that the bulk goods such as razors and pairs of jeans that he would demand as riders for many of the films he starred in, ended up at the Boys Republic.

Still sixteen years old, McQueen once again returned to his mother who was at this point in time living in New York. He then met a couple of sailors and volunteered to serve on a ship heading for the Dominican Republic but disappeared once he got there and ended up working in a brothel before heading for Texas and a number of different dead-end jobs.

In 1947 at the age of seventeen McQueen joined the Marines and during an initial period of resistance to authority was demoted to private, seven times. Eventually though after spending 41 days in the brig for resisting arrest after going AWOL he decided to embrace military discipline and even managed to get assigned to an honour guard tasked with guarding President Truman’s yacht. He was honourably discharged from the Marine Corps in 1950.

Steve McQueen’s life in acting started at Sanford Meisner’s Neighbourhood Playhouse in New York in 1952. In order to earn money, he raced motorcycles at the weekend at the Long Island City Raceway where he found he had talent enough to earn around $100 in prize money most weekends. He had a number of minor theatre parts during this time and made his Broadway debut in A Hatful of Rain in 1955. In the same year, at the age of twenty-five, he left New York and headed for Hollywood seeking employment as an actor. He was spotted in a two-part TV show called The Defenders and got himself a part in a B-movie called Somebody Up There Likes Me which also starred Paul Newman. Following this, he landed parts in Never Love a Stranger and The Blob which would be his first role as lead.

On 2 November 1956, Steve McQueen married Neile Adams and the couple had a daughter called Terry Leslie on 5 June 1959 and a son called Chad who was born on 28 December 1960. The couple would divorce in 1972.

Following the success of his B-Movie appearances, McQueen followed them up with a TV Western show called Wanted: Dead or Alive which aired on CBS. It would be this series that would lead to Steve McQueen becoming a household name, playing the part of bounty hunter Josh Randall in the 95 episodes that aired from 1958 until 1961.

At around this time, McQueen considered a career as a professional race car driver and even entered a British Touring Car race at Brands Hatch in 1961 where he finished third. In 1970 he would win the three-litre class of the 12 Hours of Sebring race in a Porsche 908/02 with Peter Revson and only missed out on winning overall by 23 seconds. The Porsche was later used as a camera car in the 1970 24 Hours of Le Mans race in order to get the footage required for the movie Le Mans. McQueen wanted to team up with Jackie Stewart and actually enter the race as a competitor but the movie’s backers wouldn’t let him.  McQueen even received a patent for a motor-racing bucket seat which he designed in 1971.

Following his next film, Never So Few, the part in which was given to him by Frank Sinatra after he had dropped Sammy Davis Jr, Steve McQueen landed his first hit when he played the part of Vin Tanner in the Magnificent Seven opposite the likes of Yul Brynner, James Coburn and Charles Bronson. The Magnificent Seven wasn’t without its tensions though, particularly between McQueen and Yul Brynner who was the lead actor in the movie as McQueen was in the habit of adding small touches that would, in Brynner’s eyes draw the attention of the viewer away from him and onto McQueen. Brynner also refused to draw his gun in any scene with McQueen as McQueen had learned the art of the fast draw during his time on Wanted: Dead or Alive and was clearly faster.

The next film was also a hit and catapulted Steve McQueen to superstar status when he played the lead in 1963’s The Great Escape. Even though many believe that McQueen performed the movie’s iconic motorcycle leap over a barbed-wire fence, McQueen himself, whenever he was asked about it, was always quick to point out that it wasn’t him but his friend Bud Ekins, a fellow motorcycle enthusiast and somewhat of a McQueen double, at least from a distance. McQueen did do a lot of the other riding in the movie though and not always as the lead character as skilled motorcycle riders were hard to come by. So much so, that due to the magic of editing, he can be seen in a German uniform chasing himself.

Over the next couple of years, McQueen starred in Love with the Proper Stranger opposite Natalie Wood, Nevada Smith opposite Karl Malden and The Cincinnati Kid opposite Ann Margret. McQueen’s only Oscar nomination came in 1966 when he played an engine-room sailor in The Sand Pebbles which also starred Richard Attenborough and Candice Bergen.

In 1968 came the movie which is probably the one which most people remember him for, Bullitt, which also starred Robert Vaughn who had also been one of the Magnificent Seven and Jacqueline Bisset. The iconic car chase through the streets of San Francisco did feature some driving by McQueen himself, particularly for close-ups, but this would amount to only ten percent or so of the chase. The rest of the sequence was driven by Bud Ekins and fellow stunt-driver Loren Janes. Although this is the movie that everyone remembers Steve McQueen for, it is also the one that lost him his seven-picture deal with Warner Brothers due to Bullitt being so far over budget. It was Warner Brothers’ loss though because when they tried to get McQueen back after Bullitt proved to be a box office smash, he signed on with United Artists instead.  This new collaboration resulted in a complete change of character for McQueen when he played a wealthy executive type in The Thomas Crown Affair opposite Faye Dunaway.

The 1970’s didn’t start off too well as the motor-racing drama Le Mans was poorly received. However, when he signed on for the lead in Sam Peckinpah’s The Getaway he became the world’s highest paid actor and he also met Ali MacGraw whom he married on 31 August 1973. In 1973 he starred in another movie that lots of people remember him for when he played the prisoner on Devil’s Island in Papillon, which also starred Dustin Hoffman. His next movie was 1974’s The Towering Inferno which was also a box office smash and saw him star alongside one of his main rivals in Hollywood at the time, Paul Newman.

Following The Towering Inferno, Steve McQueen pretty much dropped out of the public eye, preferring for the next few years to race motorcycles and travel around the country in his motorhome. He and Ali MacGraw were divorced in 1978. His final two movies would be 1980’s Tom Horn, and The Hunter, also released in 1980.

On 16 January 1980, McQueen married for the third time. This time to model Barbara Minty.

In 1978, Steve McQueen had developed a persistent cough which turned out the be a symptom of pleural mesothelioma, a type of cancer caused by exposure to asbestos. McQueen said that asbestos was used in a number of things that he was exposed to during his career, such as racing suit fire protection and insulation on sound stages but also said that the probable cause of his cancer was from when he was exposed to massive amounts of asbestos whilst removing lagging from pipes on a troop ship during his time in the Marines.

In the Summer of 1980, McQueen travelled to Mexico and paid upwards of $40,000 per month to William Donal Kelley for unconventional and controversial treatment for cancer such as coffee enemas, massage therapy and injections of live cattle and sheep cells after American doctors had told him there was nothing more they could do for him.

In October the same year, Steve McQueen returned to the USA and even though Kelley had predicted a complete recovery, he developed massive tumours in his abdomen. Later the same month, he flew back to Mexico for the surgery to remove tumours from his neck, liver and abdomen as US doctors had said that his heart would not stand the procedure. The doctors were proved correct as at 3.45 in the morning of 7 November 1980, Steve McQueen died from cardiac arrest 12 hours after surgery. He was fifty years old.

Steve McQueen was cremated, and his ashes were scattered in the Pacific Ocean.