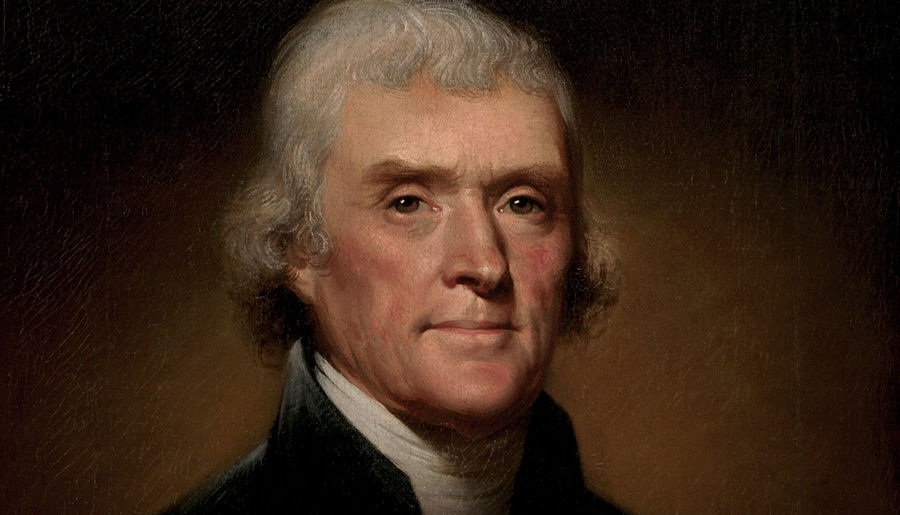 “Whenever you do a thing, act as if all the world were watching” – Thomas Jefferson

Born on 13 April 1743 in Shadwell, Virginia in what would later become the United States of America, few people could imagine all that would be accomplished by Thomas Jefferson. Thomas Jefferson had no true ties to nobility although he was born to a moderately wealthy family in Virginia. At that time, the British colonies were little over a century old and Shadwell, Virginia was certainly no place that great leadership was expected to come out of.  However, Thomas Jefferson was a man who constantly defied the odds and rose through the ranks largely by his own merit, determination, and a certain amount of personal pride.


Thomas Jefferson did receive a very high level of education for his time. It was this and his personal charisma that led him into politics – from a member of the Virginia representatives to the Continental Congress. It was there in Congress that his most important and lasting contributions to American society would be made. Chosen to be part of a hand-picked group which included James Madison and Benjamin Franklin, Thomas Jefferson was selected to draft the Declaration of Independence from Great Britain.

The version that ended up being sent to Great Britain, however, had some significant differences from Jefferson’s original writings. Thomas Jefferson spent an exceptional amount of time, effort, and emotional energy to craft what he felt was a fully-formed and perfect, legally binding document. As with most governments, though, the other members of the Continental Congress had some points of contention and felt that they could improve upon his original draft.

Despite feeling slighted, Jefferson was dedicated to the cause of independence and continued to use his brilliant mind to lead as well as his fortune help subsidise the American Revolution. During the war, he would lend his exceptional experience to the American diplomatic mission to France along with Benjamin Franklin. Once again, though, Thomas Jefferson’s self-righteous personality would find him at odds with Franklin. Together, though, the two were able to successfully ensure the continued support of France for the fledgling United States.

Following America’s successful bid for independence, Thomas Jefferson continued to have a career as a statesman and he was selected as America’s first Secretary of State under George Washington. This period of time was a training ground for American democracy, and Jefferson benefitted by seeing how the United States of America’s new style of government would operate before he became its third president. After two terms with George Washington as president, the following election between John Adams and Thomas Jefferson would be perhaps one of the most heated that America has ever experienced.

While the two had been close friends and political allies during the Revolution, the political fighting that came as both men strove for the presidency would wound their friendship for decades to come. Both Thomas Jefferson and John Adams felt each man would destroy the country. John Adams ultimately won and became the second president of the United States. However, due to his executive overreach and certain unpopular policies, he later lost out to Thomas Jefferson who became the third president of the United States in 1801.

Jefferson’s presidency would not be without its own certain share of scandals, though. Forwarding unpopular legislation to Congress, as well as the questionable Louisiana Purchase land deal, led to a marring of his presidency during his term in office. Basically, he was spending money the United States did not have. In retrospect, the Louisiana Purchase turned out to be an extraordinarily good land deal, but at the time of his signing it, it represented nearly all of the federal budget.

Additionally, the money that was spent on it would go to France and this would continue to antagonize the British who were at that time at war with the French. Thomas Jefferson did little to ease the relationship between Britain and America and it was this festering wound which would eventually lead America into her next war with the British. The policies and work of Thomas Jefferson set the stage for future conflict which would mar his short-term legacy.

When Thomas Jefferson retired from the presidency of the United States, he went back to his plantation home at Monticello. Since he was an Enlightenment Era man, Monticello was the embodiment of the coming Industrial Age featuring many unusual innovations, many of which were designed by Jefferson himself. He also continued his career as a successful plantation owner, going so far as to create special varieties of his own wines and beers which were produced at his farm.

After many years, he and John Adams were able to reconcile their differences in their old age and heal their friendship. On 4 July 1826, the fiftieth anniversary of American independence, Thomas Jefferson died at the age of 83, not knowing that his old friend was also gravely ill and would die only a few hours later the same day.

Despite the tumultuous times that Thomas Jefferson grew up in and lived through, his legacy is decidedly a positive one. It is true that the man who said, “All men are created equal” was, in fact, a slave owner, but what he laid out in his writing was not what America was then, but what America was supposed to be. He held America to a higher standard and a higher ideal, one that Americans have often fallen short of but always strive towards.